Hyuna and JS in "Trouble Maker"

Back at the end of last year, Cube label mates Hyuna and Hyunseung (aka "JS"), of 4Minute and Beast, respectively, came together to form a sub-unit of their groups called Trouble Maker. Their first single was self titled, "Trouble Maker", and the music video sees them playing spies, a bit ala Mr. and Mrs. Smith. Both Hyuna and Hyunseung wear some pretty neat stuff, which means we've got a lot to share with you. So let's begin. 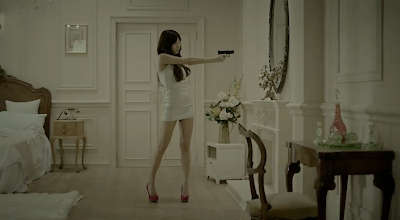 The dress is made of strips of metallic stretch fabric stitched together and features a short, short skirt, v-neck and an open back. The super body conscious dress is one of many variations on the bandage dress that the Herve Leger brand has become famous for. 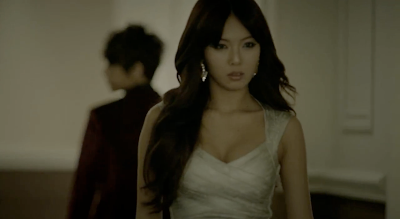 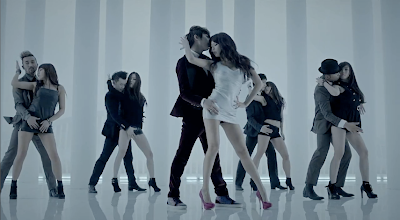 If Hyuna's dress is just your thing, you can make it yours here. And check out the Herve Leger website to view their entire collection here. 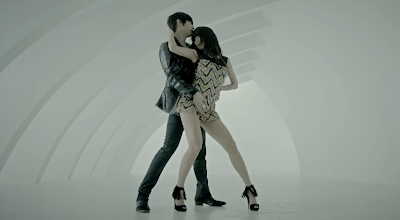 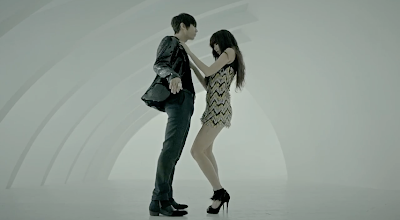 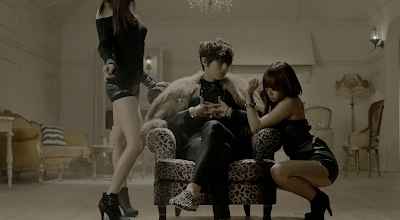 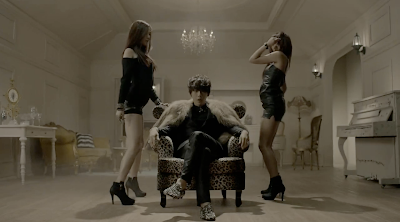 These loafers are the first of two pairs of Louboutin shoes that Hyunseung wears in the video. If you love them as much as we do, you can get your very own pair at the Christian Louboutin website here. 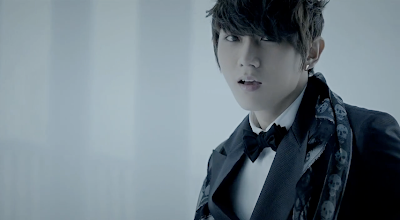 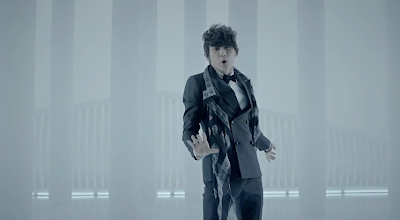 These scarves are an iconic trademark of the Alexander McQueen brand. The scarf that Hynseung wears in the video is made of black and grey printed silk chiffon. If you're feeling so inclined, check out the Alexander McQueen website here, and head to their scarf boutique to make Hyunseung's scarf your own.

Hyunseung's black suit with double-breasted jacket and peak lapels comes from Dolce & Gabbana's Fall 2011 menswear collection. It's one of two suits from the collection that he wears in the video. 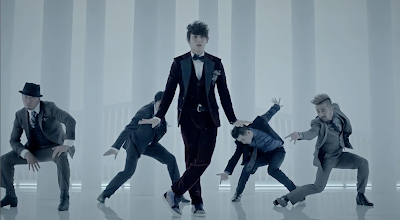 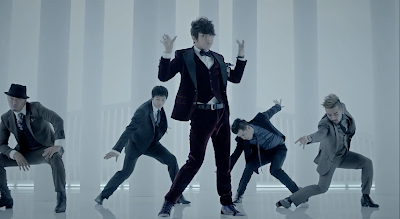 Hyunseung's burgundy velvet suit is a look from the Dolce & Gabbana Fall 2011 mens collection. And his sneakers are Louis Strass by Christian Louboutin. They're embellished with iridescent Swarovski crystals and come from Louboutin's 2011 Holiday collection.

Hyunseung also breaks up the suit and wears the jacket and sneakers with a black shirt and pants. 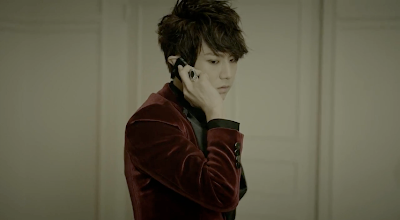 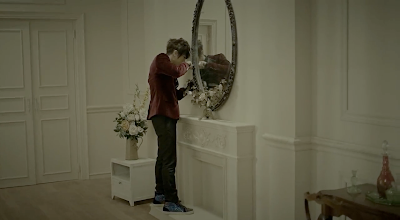 Hyuna and Hyunseung in Givenchy Fall 2011. 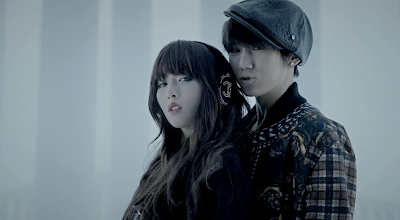 Both Hyuna and Hyunseung wore pieces from the Givenchy Fall 2011 runways.

Hyuna's top was a black pull over sweatshirt with a sheer front from Givenchy's Fall 2011 ready to wear collection. She also wore black Chanel Fall 2011 earmuffs with gold stud Chanel logos. Hyunseung wore a bomber jacket from the Givenchy Fall 2011 menswear show with plaid sleeves and a rottweiler print motif. 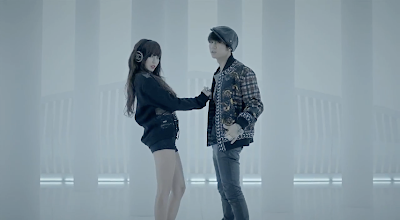 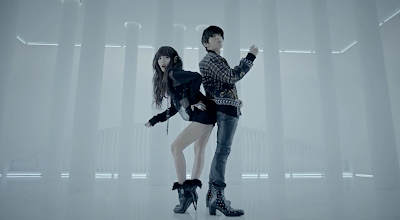 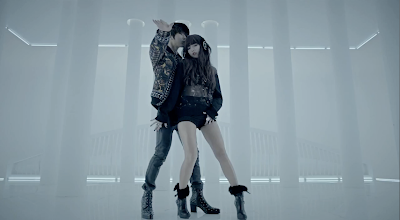 And there you have it. Thanks for sticking with us. You can check out the video for "Trouble Maker" below and let us know what you think.

UPDATE: Hyunseung's shirt from the album cover of "Trouble Maker" comes from Givenchy's Fall 2011 mens collection. It's the same collection that his rottweiler print bomber jacket comes from. His shirt is a tan button-down with a rottweiler print on the collar and sleeves and white stars printed on the front.


Hyuna also wears limited edition Daffodile Brodee platform pumps by Christian Louboutin. While you can't see them in the video (which is such a shame!), check out the shoes in this official photo from the video shoot.

4Minute in D&G for "Volume Up"


4Minute debuted the video for their song "Volume Up" earlier this year and took on vampire personas. Vampires have taken pop culture by storm over the past couple years and 4Minute seemed to be channeling a bit of the infamous Twilight series in their new video. The whole video has a slightly gothic feel and plays to the ideas of luxury and wealth. The elaborate sets all look like they could have been taken from a giant castle; everything from the ballroom above to the dungeon beneath. Adding to the concept of material wealth and opulence, the girls donned silk scarf inspired outfits from the D&G Spring 2012 collection.

The clothes' scarf print motifs came in a myriad of bright colors on the runway; Barbie pink and kelly green, turquoise and lemon yellow, and amethyst and orange. The girls, however, opted for a slightly more somber palette of navy, vermillion, gold and creme. Whatever the colors, though, these kinds of ornate prints have always had a certain air of luxury; Hermes silk scarves and Versace prints come to mind.

There's been a rise in popularity lately for this trend of silk scarf prints, and if 4Minute's outfits are calling your name, you can check out the D&G online store here. But don't hesitate, as they won't be around for long. Designers Domenico Dolce and Stefano Gabbana have announced their plan to absorb the D&G line into their main namesake Dolce & Gabbana label. This collection marks one of the last times that clothes will be available under the label D&G.

You can check out the entire collection here at the D&G website. Watch the video for "Volume Up" below and let us know what you think.

Email ThisBlogThis!Share to TwitterShare to FacebookShare to Pinterest
Labels: 4Minute, D and G, Dolce and Gabbana, Volume Up

We sat, one day, in front of a window that looked out at Manhattan on a sunny afternoon. We drank coffee, as we always like to do, and talked about all of the things we love. Everything from music and fashion to makeup and celebrities, anything beautiful and fun that inspired us. We didn't think too much of it at the time, but we kept coming back to that window, to drink coffee and to talk, and soon, Trendy Time was born.

Now we find ourselves here, with all of you. While we can't all sit in front of a giant window together, think of the computer screen as your own personal window with us. We hope you'll check back often, because you're always invited to Trendy Time.
Posted by Trendy Time at 11:03 PM 1 comment: 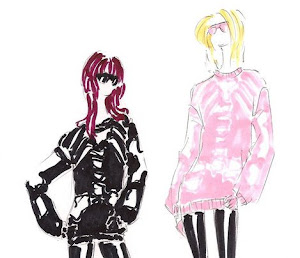 About Chris and Jen

Trendy Time
NYC
Chris and Jen at Blogspot. Two aspiring fashion designers sharing their thoughts on some of the finer things in life.